This November Gaia House teachers Yanai Postelnik, Catherine McGee, Rob Burbea, and Kirsten Kratz, along with many Dharma practitioners from the wider Gaia House community, participated in a series of planned actions of non-violent civil disobedience in London, part of an attempt to galvanize the UK government to urgently implement a truly appropriate response to the emergencies of climate change and mass species extinction. Despite dozens of participants being arrested (including Yanai and a number of senior Dharma practitioners), the days were pervaded by a beautiful and peaceful spirit. While their decision to be involved and to risk arrest, and to continue to do so, does not represent an official Gaia House stance – they choose as individuals to act in this way – each feels called by their own sense of the meaning of the Buddha’s teachings for our times, by their own conscience and sense of ethical duty. 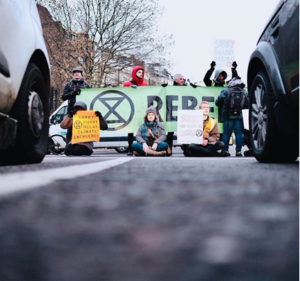 We are all asked to wake up to the severity of the situation and to see through the dangerous delusion that ‘business as usual’ is still an option. Responding to this wake-up call is the task of our times. But it can be truly heart-breaking, for so much has already been lost, so much is at stake. Rooting ourselves deeply in the heart’s capacity of care, compassion, and joy can be a powerful antidote to despair, grief, and overwhelm. So too can joining forces with others; we can’t do this on our own. And no matter what the outcome, can we view this as an invitation to step up, trust and bring forth the very best in ourselves?”  ~ Kirsten Kratz

“The abolition of slavery, women’s suffrage, the U.S Civil Rights Movement – there are issues which in their time can be portrayed as if they are debatable or just political or economic questions. A little while later it is clear to all that they are moral issues, on which human beings have a moral duty to act and take a stand. Carrying fundamental moral obligations, they make a claim on us more primary than any other. Climate change and mass species extinction are such issues. And since, for me, the Dharma is above all else about values – including and especially moral values – this is simply part of the commitment of my Dharma practice.”   ~ Rob Burbea 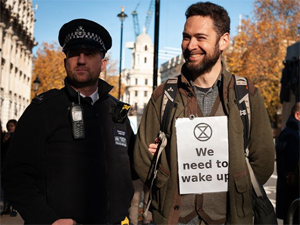 “My heart is breaking and my conscience is calling to me, saying, ‘Stand up and take a risk. What else makes sense now?’ We are risking tipping into catastrophic climate breakdown if current policy trends continue, with terrible effects already being experienced by many, mostly worse off and less privileged than myself. And so I act this way because I can, and because the usual lobbying pathways are not working. And I act this way because a force in my body demands that I must do my part. As a member of society I feel I have a responsibility to put pressure on my government to fulfil their side of the social contract and act swiftly in the light of the IPCC report.”  ~ Catherine McGee

“We face an undeclared emergency and I feel compelled by my conscience to stand up for our sacred, fragile planetary ecology, on behalf of our children and all living things who have no voice. I am called to risk my comfort, my privilege, and even my liberty, in responding to the ecological and spiritual devastation that confronts us, if we do not act together and act now, with courageous hearts.”   ~ Yanai Postelnik

To read more about the background of this action you can visit this page on the DANCE website.